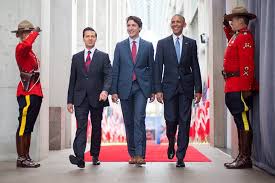 The Canadian Hydropower Association (CHA) is encouraged by the announcement made this week,  by Prime Minister Trudeau, Mexican President Enrique Peña Nieto and U.S. President Barack Obama, who pledged to get half their electricity from clean power by 2025. The CHA is also pleased to see many interesting commitments spelled out in the North American Climate, Clean Energy, and Environment Partnership Action Plan released today.

Canada has one of the cleanest electricity systems in the world, with more than 60% of its electricity coming from clean and renewable hydropower. However, continental efforts such as the one committed to yesterday by the ‘Three Amigos’ send a clear message that, together, renewable sources of electricity are a key solution to moving toward a low carbon future.

Regarding this announcement, CHA President Jacob Irving added that “Canada is very well placed to play a very important role in this clean economy transition thanks to its abundance of renewable power”.